Slik has lots of experience when it comes to designing and developing Interactive Surveys. For ProDemos, the Dutch Ministry of Justice and Security, and Foundation Matchis, we have helped many Dutch people decide whom to vote for during the elections, finding out their chances in getting a job, and with deciding whether or not to become a stem cell donor. Check out some of our projects below:

The Voting Advice Application (VAA) for the Dutch general elections.

Check your chances of getting a Statement of Conduct in all industries.

What does your future look like as a physiotherapist?

Could you save a life by donating stamcells?

The interactive survey for the municipal elections of Amsterdam.

Find your ideal workplace and employer.

See how political parties have voted in the last election period.

Free remote workshop with our experts

Do you have a fantastic idea, but don’t know where to go? Or do you know exactly what you want, but aren’t sure what it would cost to build? We love to brainstorm ideas and think of a hands-on approach to bring your idea to life. Sign up for a remote workshop with our senior designers, developers and/or consultants. Free of charge, no pressure, and safe.

Who has made the VoteMatch?

Who are the guys who have made the VoteMatch application? It’s us! We’ve made the VoteMatch for ProDemos in 2020 and in 2017 we did a huge update to improve the usability. Using frequent user research we keep improving the VoteMatch in iterations, so that each Dutch person can use the VoteMatch on each device in order to help them test their political preferences. As a partner, we have been involved in many projects of ProDemos, such as the VotingTracker, CandidateMatch and the PartyMatch.

The VoteMatch is a nice example of an Interactive Survey as support for when you have to make a choice. On top of that, it contributes to the identity of ProDemos. In this case it’s about political parties, but it could just as well be about the next step in someone’s career or by the decision if you would like to become a donor or not.

Interactive Surveys as a recruitment tool

Interactive Surveys usually have multiple purposes. For example for the StamcelMatch: this tool is being used as a recruitment tool for new stamcel donors and also to increase the knowledge of users in order to lower the gap for donations. These goals empower each other. In this case it’s about gaining stamcel donors, but it’s also possible of course to launch an Interactive Survey as a recruitment tool for new members or donors. Consider the gathering of contact data, with which you can start a targeted marketing campaign and make your list of customers or members grow.

This project is specifically about stamcel donations, but it could just as well be about other topics such as the amount of sugar in our food or education regarding waste separation.

If we’re looking at an Interactive Survey that mainly educates the target audience about a specific subject, then the VOG-Check is a nice example. With the VOG-check (VOG is Dutch for: Statement of Conduct), Justis - the screening authority for the Ministry of Justice and Security - wants to avoid mistakes about how the VOG-screening works and improve the Statement of Conduct. This tool is specifically not used as a recruiting tool - after all, no data is being collected - but it does give users useful, trustable and honest advice. Justis really intends to help Dutch citizens with their Statement of Conduct.

How sympathetic is your organisation?

The fact that your organisation offers a tool that really helps your target audience is worth a lot and that contributes to a positive look of your organisation. It’s the specialty of our team to think along with that, to help with thinking out the questions and the underlying calculations, the design and the development of a typical Interactive Survey. 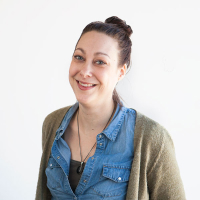 Do you have an idea for an interactive survey?

Are you curious if we can turn your idea into a great interactive survey? Get in touch with Janneke.